They want their money back.
Kim Kardashian’s insurance company has filed a $6.1 million lawsuit against the security team that was working for her during her Paris robbery.
Kimmy K’s former bodyguard Pascal Duvier and his security and protection company Protect Security are the subject of the suit. The insurance company claims they had to compensate the reality star $6.1 million for the jewelry stolen during the heist, and it was all because Duvier didn’t do the job he was hired to do.
“[Duvier] negligently, carelessly, and/or recklessly performed their protection, security, monitoring, inspection, and/or surveying of Kardashian West and the Hotel. Duvier and Protect Security should have known that they were required to protect, secure, monitor, inspect, and/or survey … using the skill and care reasonably expected of those in this industry,” the lawsuit states.
Shortly after the incident, Kim and Kanye stopped working with Duvier and hired a new security team.
“Pascal thought that he did let down Kim and didn’t do his job properly in Paris. They all agreed that it was better for Kim and Kanye to hire a completely new security team,” a source told People at the time.
We still wonder what happened to her huge diamond? 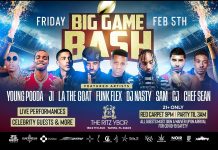 Get Your Game-Face on this Friday for “The Big Game Bash”, Pre-Super Bowl Red Carpet Event & Concert